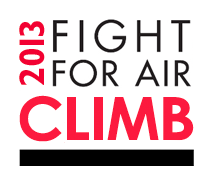 Fight For Air: Climbing for a Cause

When fitness meets a worthy cause, we are only too eager to get involved. This year, Push Pedal Pull is a very proud sponsor of the 2013 Fight For Air Climb in three U.S. cities! The first climb is hosted in Oklahoma City, OK on February 23rd in the very tall Cotter Ranch Tower, a signature landmark in the central business district. The second climb is hosted in Tulsa, OK on April 6th in the Bok Tower. The third climb is on April 7th in downtown Des Moines, IA. These lucky folks get the opportunity to climb 3 very tall buildings. All events benefit the American Lung Association.

The Fight for Air is a vertical race in which participants will climb 34-100 floors. Teams and individuals can use the event as a fitness target, as a race, as a way to honor someone who has passed from lung disease or as a chance to make new friends.

Lung disease is rampant and affects over 370,000 Americans each year. Lung cancer is the leading cancer killer in both men and women. An estimated 7.1 million children under 18 years suffer from asthma, making it one of the most common chronic childhood disorders.

We are excited to be involved with this year’s race and show our support for the men and women suffering from lung diseases. Interested in learning more? Find a race in your area, make a donation to the American Lung Association or learn the warning signs of lung disease.

The CrossFit wave is sweeping gyms across the nation. CrossFit is a type of strength and...
Read More

Inspire Others and Win!

We're all looking for a little extra motivation to keep our New Year's Resolution this time of...
Read More

CrossFit is one of the most popular fitness trends out there right now. Even if you don’t...
Read More