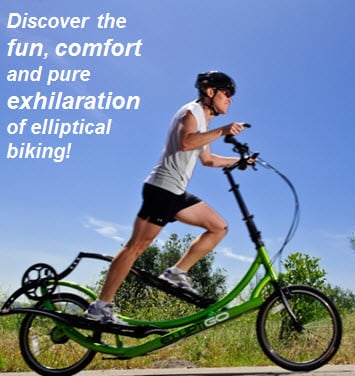 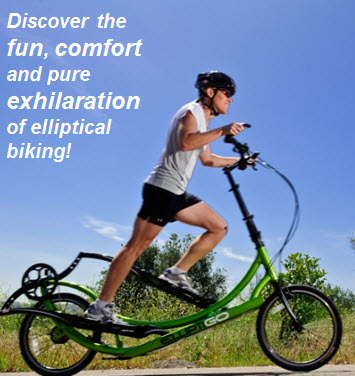 San Diego, CA (January 30, 2013)— ElliptiGO Inc., creators of the world’s fastest elliptical cycles, today announced that 2012 was a record-setting year for the company. Revenues for all product lines improved year over year in 2012 and there are now more than 7,000 ElliptiGOs on the road, nearly twice as many as a year ago. The company’s products are currently being used by more than 50 of the top runners in the country, including Olympians Meb Keflezighi, Julie Culley, Madga Lewy Boulet, Adam Goucher, Geena Gall, Alysia Montaño, Shannon Rowbury, and Mary Decker Slaney. ElliptiGO has had a compounded annual growth rate of more than 60% since launching in 2010 and the company expects to experience strong growth again in 2013.

“2012 was a great year for ElliptiGO,” stated Bryan Pate, Co-Founder and Co-President of ElliptiGO. “In addition to record revenues, ElliptiGO gained even more traction within the running community in 2012 and expanded the competitive side of the sport of elliptical biking. When we see healthy runners at the top of their game, like Meb Keflezighi, integrating the ElliptiGO into their training so they can get faster, and former runners like Mary Decker Slaney competing in ElliptiGO events, it reinforces our belief that the ElliptiGO is solving a real problem for the running community. That bodes well for our future and the future of this new industry, and we’re very excited to see what 2013 will bring both in terms of sales and athlete performances.”

Other notable 2012 achievements for the company include expanding their U.S. dealer network to more than 250 locations across the country, expanding distribution to South America, doubling the size of their sales team, getting ElliptiGOs integrated into track and cross-country programs at major universities, and having the ElliptiGO featured on Good Morning America, Fox News, CNN, the New York Times, the Wall St. Journal, Oprah Magazine, Anderson Cooper Live, Runner’s World, and Running Times Magazine.

Elite athletes who are using the ElliptiGO as part of their training include:

About ElliptiGO
ElliptiGO, Inc. is the San Diego-based company that created the world’s first outdoor cross-training device engineered specifically for runners. Combining the best of running, cycling and the elliptical trainer, the ElliptiGO® provides a comfortable, fun and effective way to exercise outdoors. It delivers a high-performance workout experience that closely mimics running outdoors while eliminating the impact. Elliptical cycling is an effective way to build cardiovascular fitness without aggravating injuries and is great for everyone from the weekend warrior to the elite athlete. The full line of ElliptiGOs can be purchased at retailers nationwide and through the company’s website: www.elliptigo.com.

This is it... the holiday shopping home stretch. The stockings are hung (albeit, empty for the...
Read More

Reduce Your Cancer Risk Through Exercise

The mental and physical benefits of regular exercise are almost too numerous to count. From weight...
Read More