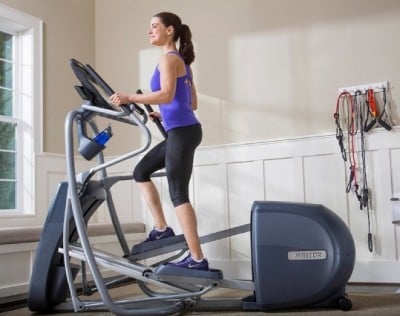 Precor Wrap-Up: What You Need to Know

Note: This is the final article in our 7-part series intended to give readers a closer look at Precor’s new line of ellipticals and treadmills.

For the past seven weeks, we’ve been using this space to inform our readers about the advantages of buying the new Precision Series and Energy Series treadmills and ellipticals by Precor. If you've missed any of the articles or would simply like a summary of the key points for quick reference, then read on.

In addition, the new machines offer a greater degree of customization than ever, thereby allowing exercisers to engage in workouts specifically targeted for weight loss, muscle toning, improving athletic performance, or other fitness goals.

The brand of choice for 24 Hour Fitness

24 Hour Fitness, the largest privately owned chain of health clubs and fitness centers in the world, recently decided to upgrade the cardio machines in their 425 U.S. locations. Toward this end, they field tested several top machines, including the Precor 811, Star Trac Pro, Matrix T5, and Life Fitness Integrity, by sending a team of their best technicians to kick the tires and look under the hood.

The techs evaluated each machine in terms of ease of serviceability, expected lifespan, quality of components, and similar variables. Precor quickly emerged as the clearcut consensus winner, so now 24 Hour Fitness members can expect to see new Precor treadmills and ellipticals at their clubs very soon!

Precor in the media

As expected, Precor’s new treadmills and ellipticals have generated significant hype in media circles. News of the launch has already received glowing press coverage in the Robb Report and Luxury Life, and thorough product reviews from well-known and respected publications such as Runner’s World, Consumer Reports, Good Housekeeping, and Forbes will be released in the near future. Moreover, Adam Hubbard, Precor’s director of product management, has been interviewed by Health Magazine and examiner.com to provide his take on the Energy Series and Precision Series models. Look for those pieces in the coming weeks.

The case for Precor

If you’re thinking about buying a treadmill or elliptical trainer for your home gym, then you owe it to yourself to consider Precor. Upgraded machines, use by 24 Hour Fitness, and positive buzz in the media combine to make a compelling case for the brand, so stop by a Push Pedal Pull location near you and ask for a demo today!

We are celebrating the grand opening of our two new stores... Maple Grove, MN and Burnsville, MN......
Read More